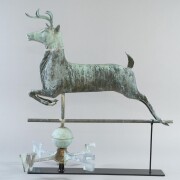 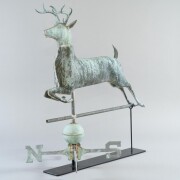 Stags can be a difficult weathervane to find and this example is truly remarkable. Its bold leaping stature and amazing patina make it a stand out piece. Composed of a solid bronze head and antlers and a copper body, this weathervane is a wonderful example of American folk sculpture work.

This piece was created by E.G. Washburne & Co. which has been documented as the first New York weathervane manufacturer established in in 1853. Initially identified as a sign painting company, in 1864 there are documented ads describing the firm as “Manufacturers and Dealers in Emblem Signs for every Business and Profession, Block and Glass Letters, Weather Vanes, &c.” Washburne & Co. remained a popular manufacturer of weathervanes into the 20th century and was kept in the family until 1956. Since then, the company has changed ownership several times, each time retaining some of the original weathervane molds. Some of these molds are still in use today in production in New England.

This piece is an absolutely wonderful survival and would be a great addition to any collection. Well-known figures in the art world like Abby Aldrich Rockefeller (whose collections form the folk art museum at Colonial Williamsburg) and Edith Halpert were also attracted to weathervanes, and they became increasing popular to acquire ever since. Adding this type of American sculpture to your collection would put you in very good company!

WHY WE LOVE IT: if you’ve driven around Loudoun County, I bet you have almost hit one of these.  This stag, with its impressive size, will command attention anywhere you set it.