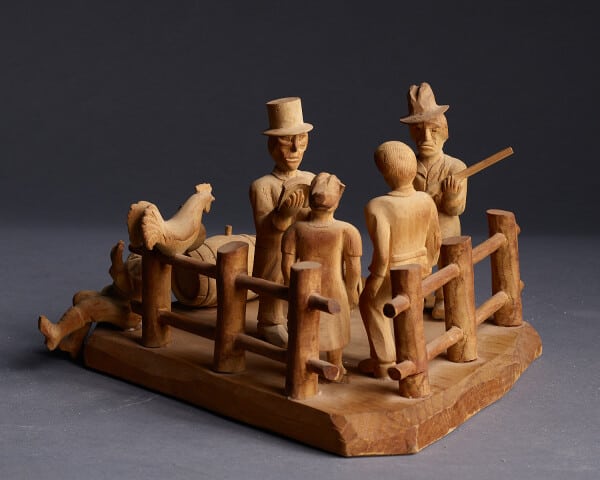 We’ve all heard the term “shotgun wedding” in popular culture but this is a fantastic circa 1930s representation of the real thing. The looks on each face convey a range of emotions. The protective father, with his shotgun in hand, protecting his daughter’s virtue; the disdainful preacher judging the couple; and the downtrodden and fearful groom, accepting his fate. At the same time, the addition of the drunkard, whiskey barrels, and anatomically correct dog shows that, in the grand scheme of things, this wedding wasn’t important. There is also a chicken roosting on a fence rail and for this couple, “their chickens have come home to roost” further symbolizing the couple’s past choices have come full circle.

While not always involving the use of an actual shotgun, the use of this term in America dates back to the 1870s and denotes any forced union. After the release of Eight Girls in a Boat in 1934, the use of the word became more comical. An example of it being used as a comedic plot point can be seen in the 1954 American musical film, Seven Brides for Seven Brothers.

WHY WE LOVE IT: Certain objects are all about humor. This piece was likely carved on a cold winter’s night in Maine. The details are amazing from the rooster to the anatomically correct dog and the facial expressions.