Thistlethwaite Americana | “The Dancers”
We pride ourselves on presenting distinctive fine and decorative arts from the 18th through the 20th century highlighting great American design.
antiques, americana
17515
single,single-product,postid-17515,woocommerce,woocommerce-page,ajax_updown_fade,page_not_loaded,,columns-4,qode-child-theme-ver-1.0.0,qode-theme-ver-6.7,wpb-js-composer js-comp-ver-4.4.3,vc_responsive 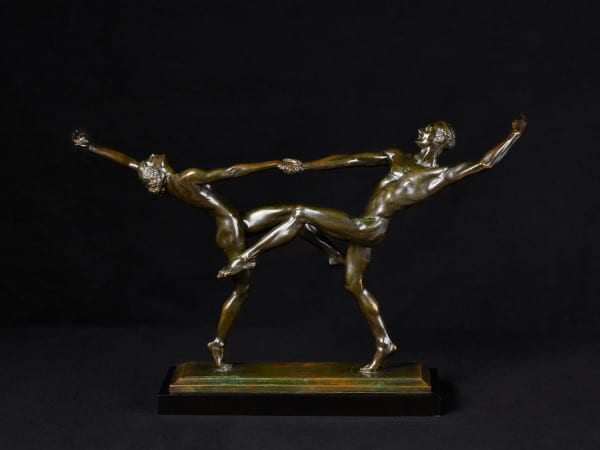 Harriet Whitney Frishmuth (September 17, 1880 Philadelphia, Pennsylvania – 1980 Connecticut) was an American sculptor known for her works in bronze.  She studied briefly with Rodin at the École des Beaux-Arts in Paris, for two years with Euchtriz in Berlin, and at the Art Students League of New York under Gutzon Borglum and Hermon Atkins MacNeil. While in New York she worked as an assistant to the sculptor Karl Bitter and performed dissections at the College of Physicians and Surgeons.

Her first commissioned piece was in 1910, from the New York County Medical Society who commissioned her to do a bas-relief. She also modeled ashtrays, bookends, and small figures for Gorham; these early pieces are highly sought after by collectors. Her career grew steadily and she became well known for her beautiful renderings of females in bronze, particularly dancers (Desha Delteil frequently modeled for her). Her small bronzes were sought after by private collectors and by museums, and her large bronzes often found a central place in elaborate garden settings.

Her work was exhibited at the National Academy of Design, the Academy of Fine Arts in Philadelphia, the Salon in Paris, the Golden Gate International Exposition (1939–1940) and the National Association of Women Painters and Sculptors. One of her last exhibits was in New York City in 1929; although she remained active in the art world for decades afterwards, the Great Depression affected her livelihood and she closed her New York studio in the 1930s and returned to Philadelphia.

She had a studio at Sniffen Court in New York City. Harriet Frishmuth scorned modern art and was quite outspoken on the subject, calling it “spiritless” (she was equally outspoken in her dislike of the word “sculptress”). She received a number of recognitions and honors over the course of her career: the St. Gaudens prize (while still a student), several awards from the National Academy of Design, a prize from the Grand Central Art Galleries, an honorable mention from the Golden Gate International Exposition, and the Joan of Arc Silver Medal from the National Association of Women Painters and Sculptors. “The Vine” (1923), a larger-than-life-size bronze considered one of her finest pieces, is in the American wing of the Metropolitan Museum of Art.

The Dancers (Pas de Deux, Taramtella) was cast in an edition of 58 and produced exclusively by Gorham Manufacturing Company. It was modeled in 1921 and cast from 1922-1933. Signed Harriet W. Frishmuth © 1921, inscribed mn75, with the Gorham Company mark on the left edge. *Frishmuth decided to close the edition of The Dancers when the intricate nature of its design made its casting prohibitively expensive.1

This model was well exhibited. It was on display at:

WHY WE LOVE IT: This is simply one of the most stunning bronzes I’ve ever come across.  The natural motion and the beauty of the figures are captured in such an elegant manner.