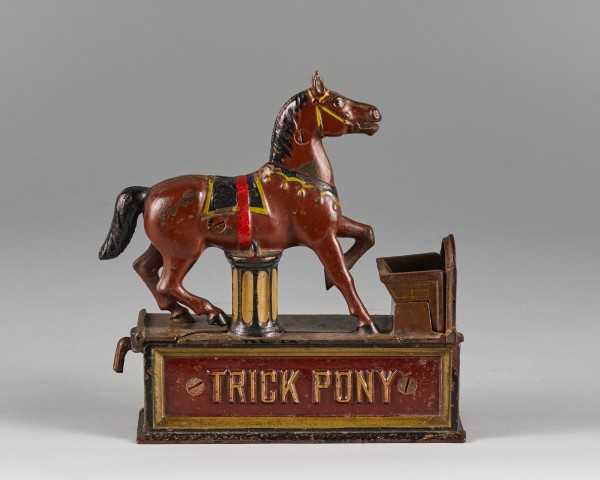 The trick pony was the first animal themed bank and one of the only ones patented by someone other than Charles Shepard or Peter Adams. Patented on June 2nd 18885 by Juleus Mueller (Wilmington, NC), the rights were assigned to Charles and Walter Shepard to manufacture the bank. The Shepard Hardware Company is known for its manufacturing of mechanical banks. How it works is when a coin is placed in the pony’s mouth, and the lever on the right side is pulled, the pony with bob his head and the penny will go into the bank through the bottom of the trough. The bank stands in excellent condition as it is still useable today. Created after the American Civil War, these banks grew in popularity. People were saving coins, causing a coin shortage. Mechanical banks were an amusing way to save coins that people so desperately wanted to keep.

WHY WE LOVE IT: Objects should make you smile and this bank provides entertainment while still being a great collectable.