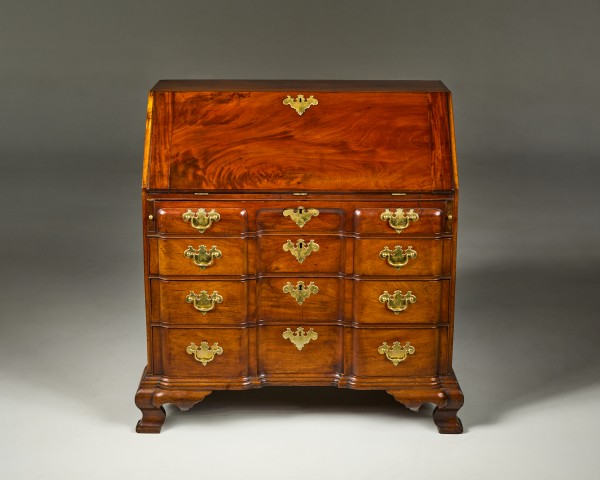 This rare and important block-front slant-front desk from Boston is a pristine example of the form in original condition. The well proportioned graduated drawers retain their original brasses; the original finish reveals the still vibrant color of the mahogany. The desk is an example of Boston’s diverse treatment of the block-front desk, with a finely detailed classic interior and a rare Boston execution of ogee carved feet in the style of Newport. The prospect is flanked by document drawers boasting Boston finials. The desk holds tantalizing clues to its early history, which add depth to its history. The desk was identified and marketed as a highlight of early American furniture by connoisseur and dealer Israel Sack, when it was depicted on the October, 1955 inside cover of Magazine Antiques.

The interior treatment echoes the exterior drawers in reverse, with concave blocking on the outer drawers and convex blocking on the inner drawers; the inner drawers sit under double pigeon holes, finished with delicately cut brackets and dividers. The prospect door and upper drawers are topped with exceptional Boston fan carving, each with ten lobes terminating in hollowed arches which have remarkable depth. This is an interior layout that can be seen in desks attributed generally to Massachusetts, but particularly in Boston and Charlestown. The interior is identical in every respect to the labeled Benjamin Frothingham (fl. 1762-1775 and 1783-1809) desk in Historic Deerfield’s collection. There are striking similarities between the two desks, including the carving of the knee brackets, though the Frothingham desk’s feet end in balls-and-claws. The bold ogee foot of this style is more commonly found in Newport than in Boston area chests. The construction of the drawers is also consistent between the desk offered for sale and Frothingham desks, which exhibit classic Boston characteristics, including the grain of the drawer bottoms runs front to back and each drawer bottom is nailed to the rabbeted edge of the front and sides of the drawer, with applied runners; Frothingham drawer sides tend not to be beaded on their top edges, however, which is consistent with the desk offered for sale. The minor differences in shop practices between Boston and the Charlestown cabinetmaker, however, are not conclusive, but suggest the opportunity for continued research.

The desk contains multiple inscriptions and markings of varying age. It is dated 17?2 in pencil on the proper right convex interior drawer. The name Philip Hichborn is also inscribed on the top side of the bottom of the upper case drawer; it is inscribed two more times on the outer side of the drawer back. An incomplete biography can be sketched of Philip Hichborn through genealogical records. Philip Hichborn first appears in Boston in 1792 when he marries Betsy Hopkins. In 1794 he was initiated into the St. Andrews Masonic Lodge, records for which list him as a cooper, but give no age. The Boston Directory for 1796 lists Philip Hitchborn as a town officer, serving as a member of the committee of “Cullers of Staves and Hoops” for four years. That committee inspected certain types of wood to ensure their quality before being imported or exported through the city port. Interestingly, both cabinetmakers John Cogswell and Thomas Sherburne appear as town officers that year as well, as surveyors of boards and shingles, another wood quality committee. In 1796, the Boston City Directory lists only Philip Hitchborn as a mariner, likely meaning ship captain/merchant, on Cross Street. Thereafter Hichborn/Hitchborn appears as a Mariner living at 27 Middle Street, just a few doors away from John Cogswell who is listed at 49 Middle Street. He appears in city directories as a mariner until at least 1809 with the exception of 1800, when he is listed as a cooper. In 1816, Hichborn died at age 46. A prosperous merchant would certainly have been a likely owner for this desk, and his proximity to cabinetmakers such as Cogswell and Sherbourne provide evidence of which shops he may have patronized. Hichborn’s year of marriage, 1792, could be the year dated on the desk.

Block-front furniture was the pinnacle of the Queen Anne style, “characterized by richness, rationality, classic proportions, and an uncompromising symmetry.” The block-front chest offered for sale represents all of these qualities in abundance. The use of the convex-concave-convex pattern, with distinct and well transitioned flats between, highlights the rationality of the piece while emphasizing what William Hogarth described as the pleasing “variety introduced by the ogee member, which is entirely composed of waving-lines,” or in other words, the s-curved “line of beauty.” The style was first introduced in North America in about 1730 in Boston, and started to appear regularly in Rhode Island in the second half of the century. Once emerged, it was the predominant fashion for Boston’s elite society until at least 1800.

The endurance of the form, well after the end of the Queen Anne style and the emergence of Chippendale and Federal styles, is a testament to its appeal as a marker of status.” Margaretta Lovell remarked on the role of the block-front form and status, stating: “The alternate raising and depressing of vertical façade panels, which has come to be called ‘blocking,’ serves no functional purpose. Since such a façade is time-consuming and difficult to construct, as well as wasteful of expensive mahogany, it may be assumed that these desks, chests of drawers, and dressing tables were destined for the homes of the style-conscious upper sort—the prosperous merchants and men of affairs.

The extravagant use and waste of primary wood to carve out the block-front shape made them at least half or two-thirds more expensive than a plain piece.

WHY WE LOVE IT: It is so cool to have a piece that has been featured “The Magazine Antiques three times – from Israel Sack, David Stockwell, and yours truly.