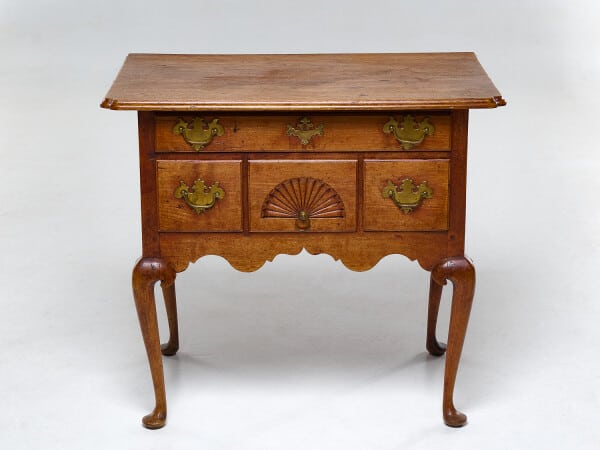 This diminutive dressing table survives in a sun-bleached, original finish with an outstanding surface. The table is early, circa 1760, from the coastal region north of Boston, an area with a distinctive regional style. The expressive shaped skirt and nicely detailed carved fan and lovely rounded cabriole legs are hallmarks of the region. The notched top is molded on all four sides.

Provenance: The lowboy was purchased by Nathan Edgar Merrill (father of Duane Merrill) from a family in Wolcott, Vermont in 1953. Merrill was a 32nd degree Mason and the seller was also a Mason. Duane Merrill recalls that around 1955 the dealer John Walton offered his father $10,000 for the lowboy, but Nathan turned down the offer. Many years later dealer Wayne Pratt also tried to buy the lowboy from the Merrill Family. After Nathan’s death in 1993, Nathan’s elder son David James Merrill inherited the lowboy. David died last year, and the lowboy then passed to David’s two sons from whom we acquired the piece.

WHY WE LOVE IT: The surface on a piece tells a story that can last a lifetime.  The gently sun-kissed finish has survived a Revolutionary War and a Civil War, and is just as lovely today as when it was made.