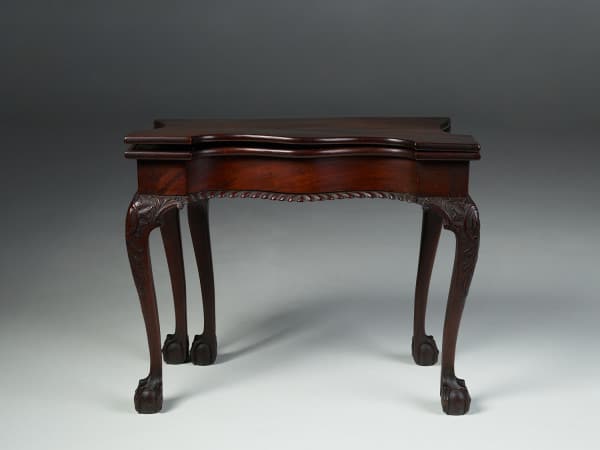 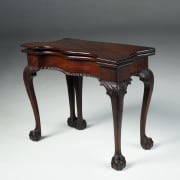 An elegant example of one of the most high style furniture forms emanating from the New York City area in the Chippendale period: the serpentine, fold top five-legged card table. Used for gaming, the top unfolds to reveal square corner candle holders and concave money pockets enclosing the playing surface. The applied, bold, gadrooned skirt is raised on acanthus leaf carved knees and cabriole legs above claw and ball feet. The rear leg swings to reveal a concealed card drawer. The right hinge is stamped H:Tibats, a known English maker of fine hardware from Wolverhampton.

According to scholar and dealer, Frank Levy, this table is attributed to the shop of Marinus Willet and Jonathan Pearsee in New York which produced many of the finest furniture examples. At least 10 similar five-legged card tables were produced in this shop, many of which have hinges stamped H:Tibats. Many of the shop’s furniture has descended in New York’s most prominent families. The partnership was fostered when Willett married Pearsee’s sister, Mary in 1760,  and they were listed in Directories between 1767 and 1775 when Willett received a commission in the Continental Army.

Interestingly, Marinus Willett (1740-1830) went on to have a brilliant career in the Continental Army, defending New York, fighting in most of the major battles and reaching the rank of Colonel.  For more information, see: Lowenthal, Larry, Marinus Willett, Defender of the Northern Frontier, New York, 2000.

There are two period chalk mark owner inscriptions with the name “Lott” under the top of the card table. The likely owner was Johannes Lott (1696-1775) of Flatbush, Long Island. Born into a yeoman farming family of immigrant French Huguenots, Johannes became a captain of the King’s County militia and fought in the French and Indian War. By the mid-18th century Johannes was one of Flatbush’s largest landholding and slaveholding citizens. He became a Judge in Kings County and member of the New York Assembly from 1727-1747. Business activities would have taken him into the city and he likely patronized the leading merchants to furnish his home on land he purchased for $10,500 in 1719. The farms and businesses were carried on after the death of Johannes by his son, Johannes, Jr.

Condition: The top has been off but reset in the original holes.  One screw pocket added. One drawer brace added, one drawer runner replaced, drawer replaced. “Lott” in chalk on front rail beneath top. On the fixed portion of the top there are old repairs at the hinges, but the hinges appear to be original. At this hinge area, old patches were conserved but no old material was removed. There are areas of surface wear and scarring on the top and loss of the original playing surface.

The Museum of the City of New York, Mrs. Giles Whiting Collection, Descended in the Frost Family of Rochester, NY

Previous owner was a direct descendent of Chief Justice John Marshall (1755-1835) but it is not probable that the table descended from the Justice.