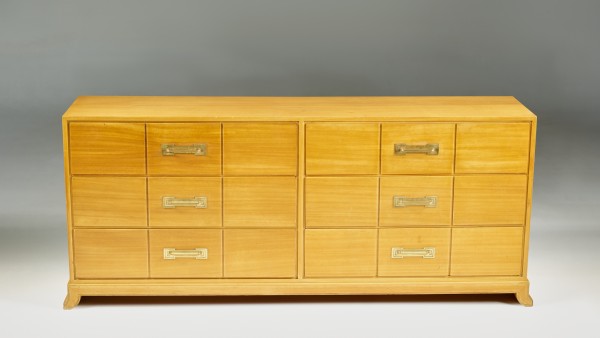 This is a wonderful example of Parzinger’s work when he started working for Charak Modern in the 1940s. This piece highlights the changes Parzinger reflected when he started working in New York. His material was more restrained yet still featured beautiful modern lines. This credenza is constructed of beautiful mahogany that has aged into a wonderful mellow finish. German immigrant Parzinger is considered the father of Hollywood Regency. Tommi Parzinger (1903-1981) moved from Munich to New York in 1932. Parzinger would create designs for Rena Rosenthal, Manhattan style-setter. The pieces he would design would develop great success. He would eventually open his own showroom and his furniture would eventually be owned by some of the biggest celebrities during his time.

WHY WE LOVE IT: Clean lines, great American design by one of America’s most noted 2oth century cabinet-makers.