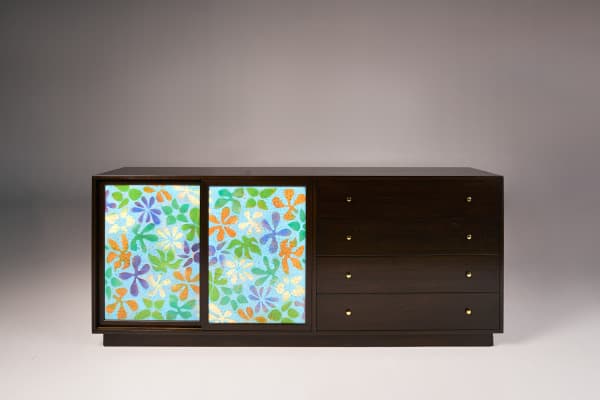 Signed cabinet in mahogany with two doors inset with jewelry enamel on copper in a graphic floral design by Harvey Probber. Probber formed Harvey Probber, Inc in 1945 and became a leading furniture designer in America during the early modern, post-war period. Known for exceptional craftsmanship, Probber looked for unique artwork to incorporate into his designs. These jewelry enamel doors were made by the noted artist Arpad Rosti.  Best known for his remarkably inventive lamps, trays and vessels designed in organic, free form shapes, Rosti was a highly versatile artist, equally at home in both the ceramics and enameling fields.  Probber often collaborated with artists to incorporate their works into his pieces.  The abstract floral designs were influenced by the paintings and mural decorations of Henri Matisse.

The mahogany case has four exterior drawers with their original brass pulls. Retains the original Probber tag on drawer interior.

WHY WE LOVE IT: This piece had flower power before it was cool!  Not only does it provoke conversation in any setting, but it can be that rare pop of color that always adds excitement.