Thistlethwaite Americana | A Calm Night on the Seas
We pride ourselves on presenting distinctive fine and decorative arts from the 18th through the 20th century highlighting great American design.
antiques, americana
18563
single,single-product,postid-18563,woocommerce,woocommerce-page,ajax_updown_fade,page_not_loaded,,columns-4,qode-child-theme-ver-1.0.0,qode-theme-ver-6.7,wpb-js-composer js-comp-ver-4.4.3,vc_responsive 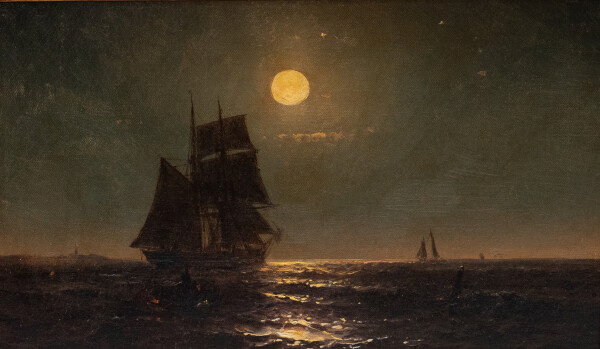 A Calm Night on the Seas

This painting is a great display of movement and depth. The eye immediately focuses on the ship and gentle moonlit waves beneath it. Then you are drawn to the ships and lighthouse in the distance, and rocks and buoy in the foreground giving you a sense of the vast sea. De Haas is known for his marine and nocturne paintings and this piece is a lovely culmination on the two, displaying what he does best.

Mauritz De Haas was born in Netherlands in 1832. He studied art at the Rotterdam Academy and at The Hague,  under Johannes Bosboom and Louis Meyer, and in 1851-1852 in London, following the English watercolourists of the day. In 1857 he received an artist’s commission in the Dutch Navy, but in 1859, under the patronage of  August Belmont, who had recently been minister of the United States at The Hague, he resigned and moved to New York City. In 1866 he was one of the founders of the American Society of Painters in Water Colors.

His Farragut Passing the Forts at the Battle of New Orleans and The Rapids above Niagara, which were exhibited at the Paris Exhibition of 1878, were his best known but not his most typical works, for his favorite subjects were storm and wreck, wind and heavy surf, and less often moonlight on the coasts of Holland, of Jersey, of New England, Long Island, the English Channel, and of Grand Manan island in the Bay of Fundy.

WHY WE LOVE IT: Our other senses seem to kick in when looking at this paining. You can imagine the smell and feel of the cool salty breeze and hear the light lapping of waves on an otherwise quiet sea.