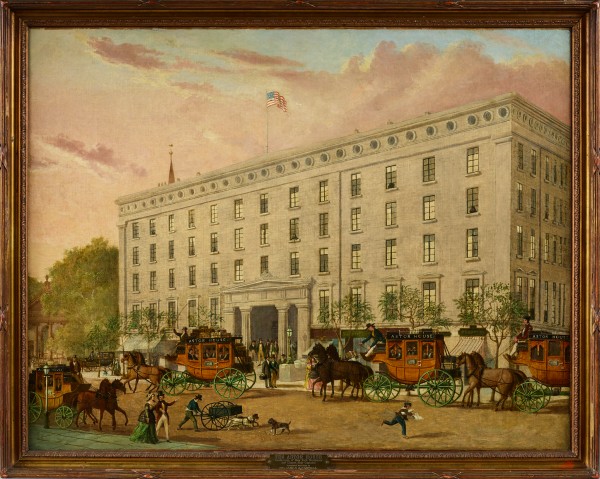 The Astor House Hotel served as New York’s first premier luxury hotel. It was the potential model for all luxury hotels that preceded it in the city. This hotel was at the height of New York society where men and women would dress in their finest clothes and wanted to be seen. This painting captures the hotel just as it had opened, filled with customers, and in the busiest part of the city.

The Astor House Hotel was located at the corner of Broadway and Vesey Street next to St. Paul Chapel. The Chapel can be seen in the background of the painting on the left side. Serving as a major New York monument, the Chapel is the oldest standing church in the city. Like the Astor House, it too has been the center of New York’s importance with even George Washington being a member.

The angle of the painting is from Broadway Street. When examining St. Paul’s closer, one can notice a small statue. That is a statue of St. Paul, located on the Broadway side of the chapel, reinforcing the artist’s angle. The location for this hotel was picked due to its geographic importance. Astor chose the location because of its proximity to major buildings including City Hall and the Post Office. These were already major business hotspots, thus contributing to the Astor House Hotel’s importance and business relation.

The details in the painting reflect why the Astor House Hotel secured itself as one of the premier hotels of its time. It was the place for young industrialists, businessmen, and sea captains alike. The hotel had major social and political importance. The Astor House even became the New York headquarters for the Whig Party. Front and center in the foreground of the painting are carriages full of men and women dressed in their finest clothes. The top of the carriages all read Astor House.

This painting was likely done by looking directly at the Astor House. The artist includes many specific details that are unique and special to the hotel. One of these is the businesses located on the ground floor. If one examines the painting closely, one will notice the names of the establishments, one being Rushton’s. Rushton’s is located at the right corner of the building. This is the corner that borders Barclay St. Rushton & Aspinwall was a drug store with multiple New York locations. This detail also helps date the painting to after 1836, when Rushton’s opened its location at 10 Astor House.

This painting hung in the India House; a social club located in New York. India House was spearheaded by James A. Farrell, president of the United States Steel Company at the time, and Willard Straight. Founded in 1914, The India House’s goal was to be a meeting place for trade, specifically foreign. The plaque on the frame made by the India House suggests that the scene is of the meeting of the New York Merchants and Clipper Ship Captains, thus solidifying the idea that the Astor House was a meeting place for influential businessmen of the time. This was likely added after the fact to connect the Astor House Hotel and Maritime decoration. Farrell perhaps wanted to connect this painting to the overall theme of the India House.

WHY WE LOVE IT: This painting is an important glimpse into the second quarter of the 19th century in New York with great provenance. Its impressive size and wonderful subject make it a truly unique piece of American art.