Thistlethwaite Americana | Death of General Wolfe at Quebec
We pride ourselves on presenting distinctive fine and decorative arts from the 18th through the 20th century highlighting great American design.
antiques, americana
17715
single,single-product,postid-17715,woocommerce,woocommerce-page,ajax_updown_fade,page_not_loaded,,columns-4,qode-child-theme-ver-1.0.0,qode-theme-ver-6.7,wpb-js-composer js-comp-ver-4.4.3,vc_responsive 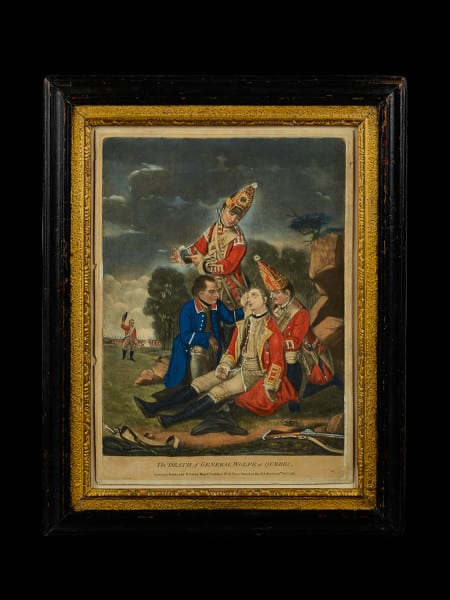 Death of General Wolfe at Quebec

The Death of General Wolfe depicts the Battle of Quebec, also known as the Battle of the Plains of Abraham, on September 13, 1759. This was a pivotal event in the Seven Years’ War and decided the fate of France’s colonies in North America.

In death, General Wolfe gained fame as a national hero. He became an icon of the Seven Years’ War and of British dominance in late eighteenth century North America.

WHY WE LOVE IT: General Wolfe was the first popularized war hero who died in the New World during the French-Indian War.  The image of his death became quite popular.  The original color and naïve nature of this mezzo-tint make it something to be treasured.