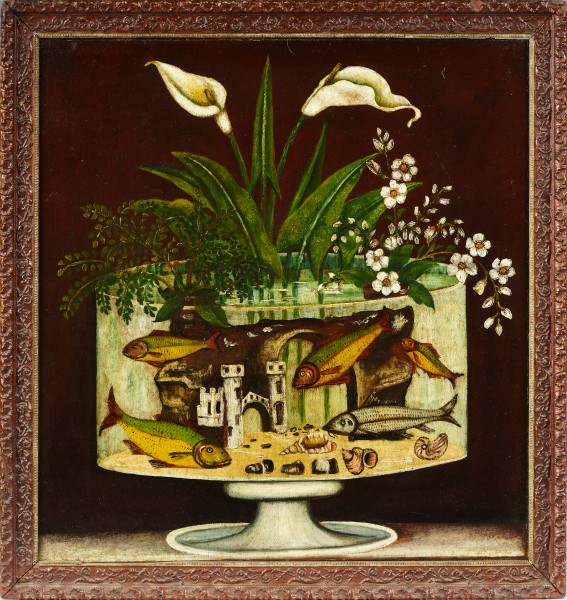 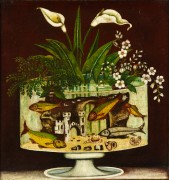 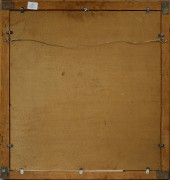 Likely sitting on a parlor table or other prime location in the house, fish globes, cylindrical jars and aquaria enabled people to display their skill in re-creating the natural environment of aquatic plant and animal life from the comfort of their homes. The beautifully depicted fish and flowers of this painting add pops of color, joy and contrast to an otherwise darkly-colored scene. The colors seem to contrast the liveliness of aquatic plants and animals with the seriousness of their scientific study, making for an intriguingly intelligent viewing experience.

The cylindrical fish jar in this painting is an example of a style in-between a fish globe or bowl, and an actual aquarium. A fish bowl or globe was not considered to be an ideal method for displaying fish, as the curved glass distorted the viewers’ ability to gaze upon the fish and are easily knocked over. The cylindrical fish jar in this painting was considered to be a slightly better home for fish and aquatic life than a globe.

While the fish globe of the 19th century was intended to hold only fish, the jars and aquaria of the period were designed to aid in the re-creation of the natural environment its aquatic inhabitants. The cylindrical fish jar in the painting has a layer of rocks on the bottom, a castle, mollusks/mollusk shells, and plant life in addition to fish, suggesting that it was utilized like more ornamental plate glass aquaria to simulate an ecosystem.

The addition of the castle folly in the painting does not mimic the natural ecosystem of a fish, and initially seems to solely add a whimsical aesthetic to the jar; possibly even giving the fish a taste of the popular follies experienced by its owners when wandering through pleasure gardens.

However, the addition of castles, grottos and ruins to fish jars and aquaria were actually functional: they provided stability for the root systems of the plants added to the fish jar. This is wonderfully depicted in the painting by the stems of the peace lily and other plants either disappearing behind the castle folly or being directly adjacent to it.

WE WE LOVE IT: The painting of this fish jar, with its brightly-colored fish, dark background, white peace lilies, and castle folly beautifully brings together elements of the 19th century. It is a wonderful addition to any room.

WHY WE LOVE IT: