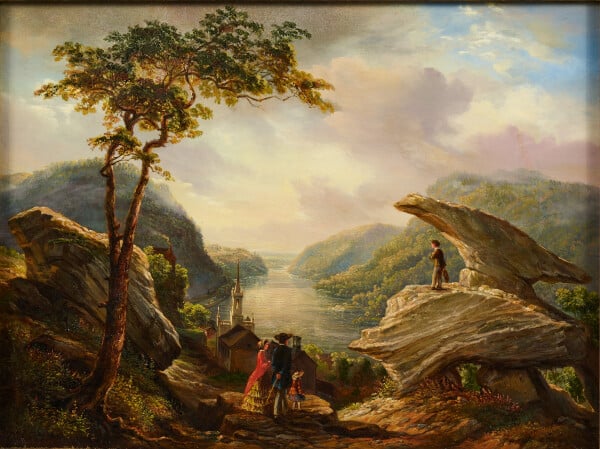 Harpers Ferry may be one of the most iconographic landscapes of the American South. This stunning, bucolic painting of Jefferson Rock depicts a sweeping vantage into the West Virginia town of Harpers Ferry, with the Potomac flowing east. Jefferson Rock has been an Iconic feature of Harpers Ferry since the Town’s creation. It was given the name Jefferson Rock after Thomas Jefferson visited the natural wonder on October 25th 1783. Years later, in Jefferson’s Published Notes on Virginia, he described Harpers Ferry as: “The passage of the Patowmac through the Blue Ridge is perhaps one of the most stupendous scenes in Nature. You stand on a very high point of land. On your right comes up the Shenandoah, having ranged along the foot of the mountain a hundred miles to seek a vent. On your left approaches the Patowmac in quest of a passage also. In the moment of their junction they rush together against the mountain, rend it asunder and pass off to the sea.”  The first glance of this scene hurries our senses into the opinion that this earth has been created in time, that the mountains were formed first, that the rivers began to flow afterwards, that in this place particularly they have been so dammed up by the Blue Ridge of mountains as to have formed an ocean which filled the whole valley; that, continuing to rise, they have at last broken over at this spot and have torn the mountain down from its summit to its base. The piles of rock on each hand, but particularly on the Shenandoah, the evident marks of their disruptions and avulsions from their beds by the most powerful agents in nature, corroborate the impression.

“But the distant finishing which nature has given the picture is of a very different character. It is a true contrast to the former. It is as placid and delightful as that is wild and tremendous. For the mountains being cloven asunder, she presents to your eye, through the cleft, a small catch of smooth blue horizon, at an infinite distance in that plain country, inviting you, as it were, from the riot and tumult roaring around to pass through the breach and participate in the calm below. Here the eye ultimately composes itself; and that way, too, the road happens actually to lead. You cross the Patowmac above the junction, pass along its side through the base of the mountain for three miles, the terrible precipice hanging in fragments over you, and within about 20 miles reach Frederictown and the fine country around that. This scene is worth a voyage across the Atlantic.”

Jefferson’s sweeping description of this area is captured in this painting. With Jefferson Rock and admiring figures in the foreground, we gaze down to the town of Harpers Ferry with St. Peters Church prominently featured. We see the Potomac river gracefully stretching off into the horizon with a small train from the Baltimore Ohio Railroad pulling towards the town.

This painting is dated by many features including the dress of the figures, the inclusion of the Baltimore Ohio Railroad, and that Jefferson’s rock is free-standing without any support, which was added at a later date. All these features point to a period between 1837-1850.

The academic precision of the painting, palate, and overall style point to authorship by famed 19th century landscape artist, Ferdinand Reichardt (1819 – 1895). Danish born, Ferdinand Reichardt is most known for his grand, sweeping landscapes of America, oftentimes river views surrounded by natural beauty. Reichardt painted several well known views in Harpers Ferry; of the town and the canal. The 41st entry in the artist’s catalog raisonee points to further evidence that the artist authored the painting. The entry reads:
Taken from Jefferson’s Rock, the rivers Shenandoah and Potomac in the background; to the right the Canal. In the foreground to the left several buildings, prominent amongst them a Catholic chapel. To the right the Blue Ridge Mountains.

Condition: Overall good condition with recent cleaning and repairs by Collin Post of Asheville, NC.  There has been conservation to a hole that stretched from Jefferson’s Rock to the lower part of the skyline.