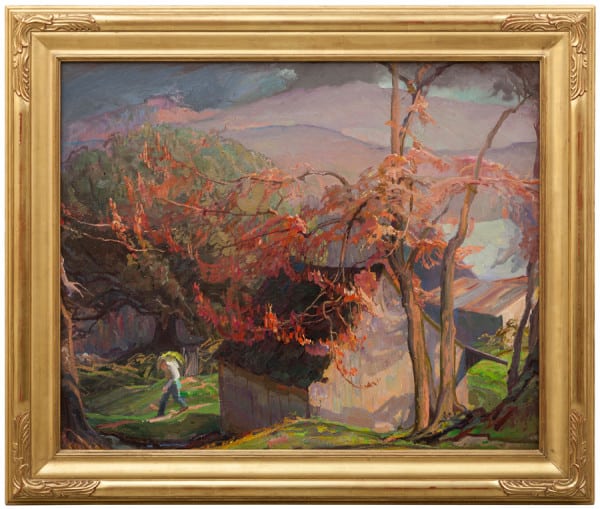 Likely on her farm in Fredrick, Maryland

A painter of landscapes, portraits and genre pictures, Gladys Nelson Smith was raised on a farm near Chelsea, Kansas.  One of ten children, she began to draw at an early age.  In 1912, she enrolled at the University of Kansas in Lawrence, where she majored in fine arts.  The faculty, headed by William A. Griffith, had an Impressionist orientation, and Smith adopted their bright palette and broad brushwork, applying it to her early landscapes and portraits.

Following her graduation in 1918, the artist married Errett Smith, a lawyer and fellow University of Kansas alumnus, and moved with him to Iowa while he trained with the United States Army.  After the armistice, she awaited his return from Europe in New York City.  There, Smith matriculated at the Art Students League and, at one point during her course of study, attended a lecture given by the New York Realist, John Sloan, whose work seems to have had an influence on her development.

Smith’s New York classwork was cut short when she succumbed to the dreaded influenza of 1918.  She developed pneumonia and returned to Kansas to recuperate. In 1919, Errett Smith was discharged from the Army, and the young couple moved to Minneapolis.  They subsequently lived in Chicago in 1923, where Smith studied briefly at the Art Institute; in 1924, they took up permanent residence in Washington, D.C.  From 1924 until 1930, Smith honed her skills at the Corcoran School of Art under the tutelage of various artists, including the Boston Impressionist Edmund C. Tarbell.  The Corcoran classes concluded her formal artistic training.

Smith’s exhibition activities began in 1921, when she submitted eight paintings to the Kansas Free Fair in Topeka.  During the 1920s, she was chiefly admired for her paintings of children. These young subjects are usually posed with their mothers and are shown chasing butterflies, flying kites, picking flowers and falling asleep. Motherhood was a popular subject for a female artist, and Smith’s works were well received by the critics. “Her composition is exquisite,” wrote one, “while the theme (child life), which she appears to have chosen for her life’s work, has a freshness, originality and appeal to the masses, and is interpreted with so much understanding and tenderness, that she certainly will, one day, be a sensation in American art circles” (Simmons, p. 15).

Smith exhibited a figurative work entitled Autumn, “showing the radiance of light through frosty atmosphere” (Simmons, p. 9) at the Corcoran Gallery of Art in 1927. A year later, two other figurative works, Holiday and Morning Sun, were included in the Society of Washington Artists exhibition at what is now called the National Museum of American Art.

Smith continued to receive good reviews throughout the 1920s.  In 1930, the Topeka Daily Capital noted: “Her ability as a landscape painter is second only to that of painting children.  She loves to portray in her own special way the moods of nature, those subtle qualities in the coming storm, the roaring wind and the beautiful sunset, which most of us feel but cannot express” (Simmons, p. 9).

In December 1930, the Smiths departed on a two-month tour of European museums and galleries, affording the artist a first-hand view of Old Master paintings.

Although Smith spent her early years in the Midwest, she came to artistic maturity in the nation’s capital, and her paintings are strongly linked to that city’s life and landscape.  From 1924 until 1930, while attending classes at the Corcoran, Smith lived in a small apartment in Washington’s northwest section and maintained a studio at the school.  When the weather permitted, she roamed the city, recording the quaint charms of Georgetown, old Alexandria and scenes along the C & O Canal and the farmer’s market.  Many of these plein-air sketches were incorporated into finished paintings.  In 1933, the Smiths moved to a renovated carriage house in Washington’s “Latin Quarter.” The new house was large enough to accommodate a studio, and Smith soon embarked upon her best and most productive period.

Smith had begun her art training at a time when the academic tradition was severely threatened, not only by the Ashcan school, but more significantly, by the Abstractionists after the revolutionary Armory Show of 1913.  For Smith, steeped in the traditions of the previous generation, it was natural to continue painting ordinary people, her relatives and friends.

She had become convinced that portraits were her forte and “gained a reputation for [genre] portraits of children, which, although difficult, she found the most enjoyable to create. ‘A child is such [that] I can put the best of myself in the painting,'” she once told a dealer (Simmons, p. 10).  A work entitled Boy (Boy With a Drum) won the popular prize at the forty-eighth Anniversary Exhibition of the Society of Washington Artists in 1939.  Lila Mechlin, art critic for the Washington Star, singled the picture out for praise. “It has dignity, grace and finish, but it is vital and atmospheric at the same time” (Simmons, p. 11).

An eighty-six acre, Frederick County, Maryland farm purchased as a weekend retreat in 1939 became a source for many of Smith’s mid-century paintings.  The Frederick landscapes, executed in a palette of mossy greens, gray violets and salmon pinks, faithfully capture the spirit of the land.  They are not, however, spontaneous. According to the artist’s sister, Smith sketched the landscapes in the country, but completed them in her Washington studio: “She would paint briefly, perhaps for weeks, on one canvas, put it in a frame and hang it on the wall, then study it from all angles in order to decide what more needed doing.  The practice-since she might launch a new painting next morning-explains why so many of her canvases are unsigned.  The signature was seldom added unless a painting was going to exhibition or was sold” (Nelson, p. 28).  The practice also explains why Smith’s works are rarely, if ever, dated.

In 1941, the Smiths left their downtown address and moved to the suburbs.  Though Smith’s studio was downsized as a result, the house in Chevy Chase, Maryland offered more space for living and a neighborhood replete with beautiful trees. Smith’s new life involved more social commitments, but she still found time to paint: back yards, front yards, neighbor’s houses, trees in every season.  An avid gardener, Smith had a particular interest in flowers and became known in the 1940s for her floral still lifes, often created in her own garden.

During this time, Smith exhibited to increasingly mixed reviews. “She attributed her lack of recognition to the growing influence of Modernists,” who she felt were crowding the more traditional artists out of the market (Simmons, p. 13). In 1953, convinced that her work had “no chance til this madness [modern art] is over” (Nelson, p. 29), Smith set her brushes aside and turned her attention to writing, an interest she had nurtured since her teens. She completed a number of short stories and poems, none of which were ever published.

Apparently reinspired, Smith built a large studio with a skylight onto the north side of her Chevy Chase home and resumed painting in 1966.  A series of accidents and illnesses followed, however, and by the fall of 1971, she was an invalid.  The loss of her beloved husband in 1973 left Smith, childless and suffering from glaucoma and Parkinson’s disease, alone.  She died in 1980 at the age of ninety.
Two one-woman exhibitions at commercial galleries in Washington, D.C. and Frederick, Maryland distinguished Smith’s final year. In summarizing Smith’s accomplishments, one critic wrote: “Her landscape compositions tend toward an Impressionist palette, and her figure compositions, which comprise the best of her work, toward a more classical use of colors. Some of her still lifes are very bold and larger than life. . . . She is one of the finest American Realists I have seen, of the last fifty years” (Simmons, p. 14).

WHY WE LOVE IT: The Impressionist feel of this painting captures early spring in Frederick, MD.  Y0u have to have seen the Catoctin Mountains in springtime to know how well she captures their beauty.