Thistlethwaite Americana | Map of the City of Washington
We pride ourselves on presenting distinctive fine and decorative arts from the 18th through the 20th century highlighting great American design.
antiques, americana
17214
single,single-product,postid-17214,woocommerce,woocommerce-page,ajax_updown_fade,page_not_loaded,,columns-4,qode-child-theme-ver-1.0.0,qode-theme-ver-6.7,wpb-js-composer js-comp-ver-4.4.3,vc_responsive 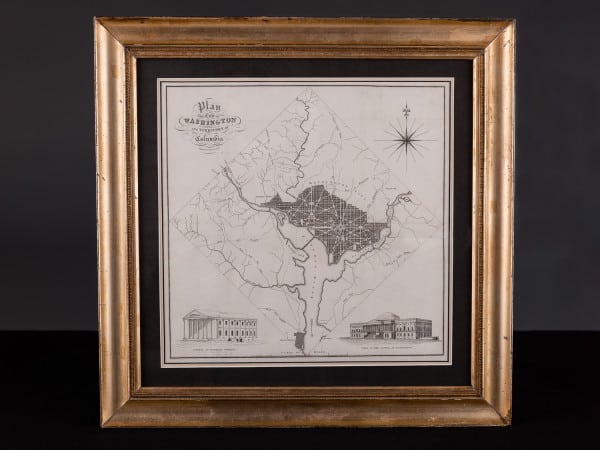 Map of the City of Washington

A rare map of Washington and the Territory of Columbia showing the extent of the entire territory with an early depiction of the City of Washington along with views of the Capitol at Richmond and Washington, DC.

Lizar’s view is of special note for its depiction of the Territory of Columbia as a whole, not just the City of Washington proper. The map is apparently derived from Andrew Ellicott’s Territory of Columbia published in 1794. The area was surveyed by Ellicott who drew two manuscript plans at the request of Thomas Jefferson in 1793. The Territory consisted of 64 square miles ceded by Maryland and 36 square miles ceded by Virginia. Other maps were drawn shortly thereafter but ignored the whole Territory, making this map by Lizars one of the earliest depictions and one of the few to refer to the region as the Territory (as opposed to the District).

Why we love it: I often claim that I am living in Alexandria and from Washington DC.  This map backs me up.