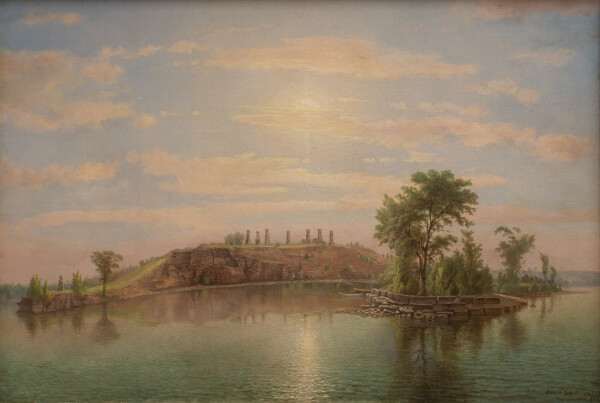 Housed in its original frame.

In this painting, John Carlin wonderfully illustrates a historically significant piece of land that served Native Americans, Europeans, and Americans all within a hundred year span. Old Fort Carleton is located on an island in the St. Lawrence river originally held by the Iroquois. One of the first Europeans to take notice of the island was Pierre François Xavier de Charlevoix, in 1720 noting that,”its bays could be useful.” The island was renamed Carleton Island after Major General Sir Guy Carleton, Governor of the Province of Quebec. It was one of several islands that were renamed after General James Wolfe’s adjutants in the Battle of the Plains of Abraham. During the American Revolutionary War, the British used the island as a military supply transshipment location, naval station, and for building ships. The island also served as a base for raids against American towns, and Loyalists used the island as a refuge to escape rebel persecution. After the war the island was ceded to the Americans.

John Carlin, born in Philadelphia, was profoundly deaf from early infancy and a ground breaking advocate for the advancement of deaf and mute people in America. Carlin studied art in the US, England, and France. He ultimately returned to the United States to launch a successful career as a painter of portraits, landscapes, and genre scenes.

WHY WE LOVE IT: The piece was created by one of the earliest advocates for the deaf and hard of hearing. Mr. Carlin, proficient in five languages, was not only an artist but a a highly regarded poet as well.