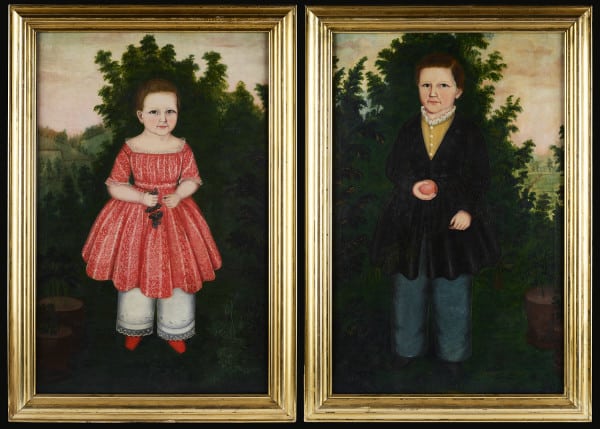 Pair of Portraits of Theodore and Ann Eliza Collins

Susan Waters painted children’s portraits between 1843 and 1846 in the region around the Pennsylvania/New York border. On the reverse, these sisters are identified by the artist as brother and sister Theodore (b. 1841) and Ann Eliza Collins (b. 1843) of Greene County, New York. After 1846 there are no portraits attributed to Susan Waters, perhaps because of her husband’s poor health. In 1866 she settled in Bordentown, NJ where she concentrated on painting animals and still lifes. In 1876 she exhibited two animal works at the Centennial Exposition. Waters, a financial success, continued to paint until two months before her death in 1900. Her early decision to become an itinerant oil painter and her reliance upon her art for financial support were remarkable for a woman in nineteenth-century America. Consistent with her choice to pursue a career were her liberal attitude toward women and work and her active support of the Woman’s Suffrage Movement.