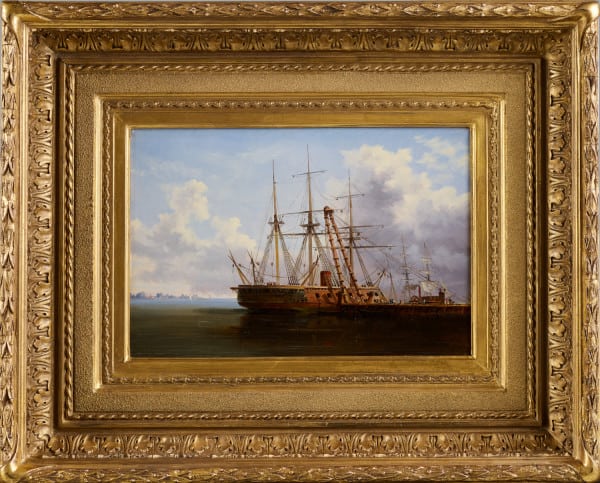 Xanthus Russell Smith was born in Philadelphia in 1839, the son of Russell Smith and Mary Priscilla Wilson Smith, both of whom were painters. As a child he received his schooling at home and joined members of his family on sketching trips at home and abroad. About 1856 he entered the University of Pennsylvania where he studied medicine, but at the same time he attended drawing classes at the Pennsylvania Academy of the Fine Arts. Subsequently he sought additional fine art instruction at London’s Royal Academy.

Smith enlisted in the United States Navy in 1861. Commissioned as a clerk, he was assigned to the Wabash and developed a warm friendship with Admiral Samuel Du Pont. When Du Pont was relieved of his duties in July 1863, Smith accompanied the Admiral to his Delaware home to assist him in writing his book on monitors. In May 1864 Smith returned to active service aboard the U.S.S. Augusta. In each arena in which he served, Smith sketched and painted sailing ships, monitors, and the naval actions that he witnessed. He also painted many war related scenes from the descriptions of others. The Pennsylvania Academy owns several of Smith’s paintings from this time period.

After the war Smith made his home at Edgehill, Pennsylvania, and maintained a studio in Philadelphia. He spent many summers in the White Mountains and on the coast of Maine, and developed a reputation for his landscapes of these places. However, it is for his drawings and paintings from the War Between the States that his work is valued by collectors of Southern art.