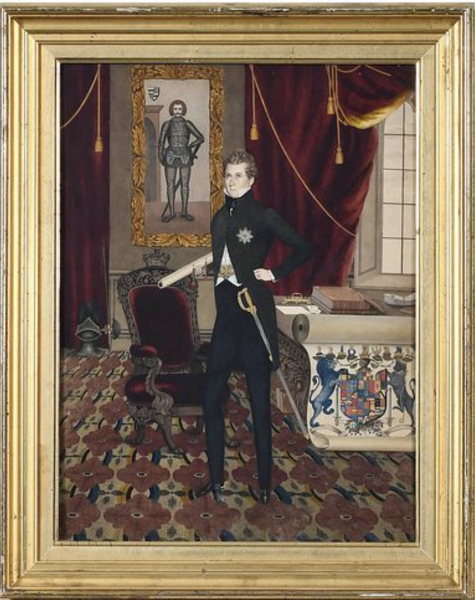 George Henry Harrison Esq (1816-1846) was an English watercolor painter and an associate of the Old Watercolor Society. Harrison first exhibited at the 1840 Royal Academy. Born in Liverpool, England, he was the second son of Mary Harrison, a notable flower-painter and the illegitimate son of a failed merchant and landowner. Harrison was known for his landscape scenes. He exhibited over 20 painting from 1840 up until his death by aneurism in 1846 at the Royal Academy, British Institution, and Suffolk Street Gallery.

David Ker states, “The sitter may well be George Henry Harrison A.O.W.S. (1816-1846) who would have been 24 when this portrait was painted. He was the illegitimate son of a failed merchant and landowner and of the flower painter Mary Harrison. The circumstances of his birth may help account for the exuberant and somewhat fanciful display of heraldry. The coat of arms is for Harrison of London and Yorkshire but the inclusion of the arms of St. Edmund and those of Scotland, Ireland, and the Royal English arms would appear to represent a dubious claim to ancient and aristocratic descent. Furthermore, the device of the two arms holding swords is that of the Queen’s Hereditary Champions and is borne as such only by the family of Dymoke of Scrivelsby. The supporters, the eagle badge, and the Order on Mr. Harrison’s coat suggest a Catholic connection. Such flamboyant displays of ancestral pride arose from the great interest in Arthurian legend which peaked around the mid nineteenth century.”

WHY WE LOVE IT: The details of this painting are truly remarkable. This gentleman is showing off his heraldry and his importance. From his jewelry and attire to the two coat of arms featured in the painting, this image is declaring he is an important man.