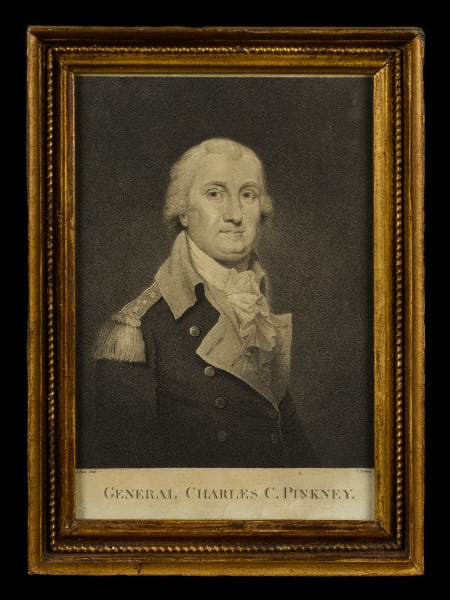 Charles Coatsworth Pinckney (1746-1825) was a lawyer, planter, officer in the American Revolution, foreign diplomat and Federalist candidate for vice-president and president of the United States. Born in Charleston, South Carolina and educated in England and France, Pinckney returned to South Carolina in 1769 and was elected to the South Carolina House of Assembly the same year and admitted to the bar in 1760.

He joined the Charleston militia in 1772 as an ensign and was promoted to lieutenant in 1774. The following year he became Captain of the First Regiment of South Carolina, was then promoted to major and in 1776 to colonel. In 1780 when Charleston fell to the British Navy Pinckney was captured and spent two years under house arrest. He was released in 1782 in a prisoner exchange that included British General John Burgoyne. At the end of the war he was promoted to brigadier general.

In 1787, Pinckney served as a delegate to the Constitutional Convention. He remained active politically and also continued his legal practice. He amassed a personal fortune and a powerful political coalition. In 1796 he replaced James Monroe as Minister to France. The French government refused his credentials and Pinckney was appointed to a three-person delegation to France to negotiate a treaty with the French. The negotiations broke down and he returned to America where he received a promotion to major general in the United States Army. He assumed a leading role in the Federalist Party was their vice-presidential candidate in 1800 and the presidential candidate in 1804 and 1808. Pinckney was a founding member of the Society of Cincinnati and from 1805 until his death he served as President General of the Society.

Many portraits of Charles Pinckney were commissioned during his lifetime from the leading artists of early America: Henry Benbridge, John Trumball, James Earl, Gilbert Stuart, Charles Fraser and Jeremiah Paul. Engravings were made from two of these portraits: one, a half-portrait by James Earl, published by James Akin and William Harrison in 1799 and this example, published between 1800 and 1810 taken from an unrecorded painting by Philadelphia artist Jeremiah Paul. In both cases the prints were probably issued to promote Pinckney’s bids to win the American presidency in 1804 and 1808.

The artist after which this engraving was taken, Jeremiah Paul, Jr. (b.c.1761-1820) trained under Charles Wilson Peale, Rembrandt Peale and Gilbert Stuart in Philadelphia. He painted portraits that were later engraved and printed of other prominent men in the region including George Washington, Benjamin Rush and The Rev. John Carroll of Baltimore. Here he has depicted Charles Pinckney in a military uniform with three stars on his epaulets.

This engraved portrait survives in its original frame identified by a label on the reverse from William Tolman, Gilder, Looking Glass and Picture Frame MANUFACTURER at 61 Newberry Street in Boston. He also advertises that he has prints and drawings for sale. From city directories, it appears that Tolman was in business in Boston from about 1800 to 1815.

This engraved portrait of Charles Pinckney appears to be extremely rare, and made more so by its survival in the original labeled frame. Only two other copies have been located, one at the Worcester Art Museum and a second at the National Portrait Gallery.

The print is listed in the 1907 book, American Engravers Upon Copper and Steel: Check-list of the works of the earlier engravers, entry # 3189 by David McNeely Stauffer.