Thistlethwaite Americana | The Quintet
We pride ourselves on presenting distinctive fine and decorative arts from the 18th through the 20th century highlighting great American design.
antiques, americana
17550
single,single-product,postid-17550,woocommerce,woocommerce-page,ajax_updown_fade,page_not_loaded,,columns-4,qode-child-theme-ver-1.0.0,qode-theme-ver-6.7,wpb-js-composer js-comp-ver-4.4.3,vc_responsive 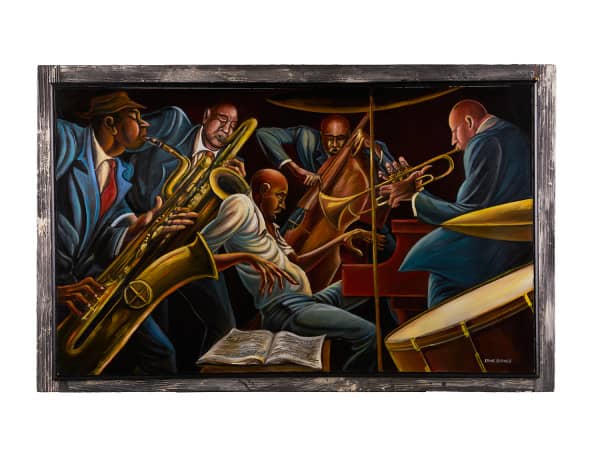 In 1966, Ernie Barnes retired from professional football to commit himself to a second career as a painter. From his childhood, Barnes nourished his passion for art, sketching and painting  during college and his professional athletic career. His athletic career made a special contribution to his sensibility and his art, and he often wedded physical with artistic expression.  Many of his subjects are satirical, and he used exaggeration, and even caricature, to enhance their mood, humor and physical vitality.

After his retirement, In 1966 Barnes had his first solo exhibition in New York City at the Grand Central Art Galleries. This exhibit was an artistic and commercial success and his career appeared to go from strength to strength. The Quintet was included in The Beauty of the Ghetto, an exhibit of 35 Barnes paintings that toured from 1972-1975.  [Exhibition catalog: Grand Central Art Galleries, Inc. presents Ernie Barnes, The Beauty of the Ghetto, an exhibition of neo-mannerist paintings. (The Company of Art, 1990), p. 29.] One of his most famous paintings, The Sugar Shack was chosen as the cover of Marvin Gaye’s 1976 album, I Want You.  In 1984, he became the official artist of the Los Angeles Olympics.

In 2019, in recognition of Ernie Barnes’ valuable contributions to American art, the California African American Museum in Los Angeles mounted a retrospective exhibit which illustrated the powerful elements his childhood in Jim Crow-era North Carolina, and his football and Hollywood careers were synthesized in his extraordinary art.