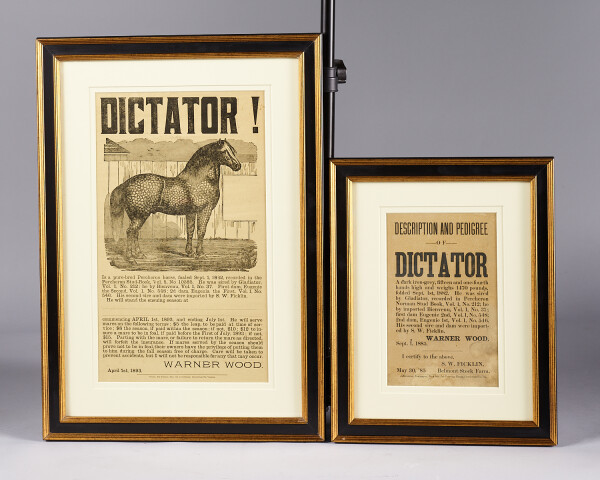 Unusual broadsides advertising the stud services of “Dictator” a registered Percheron stallion. Owned by Warner Wood of Farmington” in Albemarle County, a farm he inherited in 1877 and managed until his death in 1902. He was described by his cousin: Cousin Warner looked a typical English Squire—tho’ I do not believe he ever went out of the State of Virginia—Plump—smooth shaven—very florid—round faced—very quiet & phlegmatic. Brief in speech—a splendid farmer & one of the neatest men I ever knew. (from: memoir book of R.T.W.Duke Jr,. Octo 23d 1899, Albert and Shirley Small Special Collections, UVA Library).  This horse has a long history of being a highly desired stud.  These two broadsides include an advertisement from 1885 and a pictorial broadside from 1893 at the height of his popularity.

WHY WE LOVE IT: It is extremely rare to see a Percheron broadside.