Thistlethwaite Americana | A Portrait of a Boy With His Dog
We pride ourselves on presenting distinctive fine and decorative arts from the 18th through the 20th century highlighting great American design.
antiques, americana
18590
single,single-product,postid-18590,woocommerce,woocommerce-page,ajax_updown_fade,page_not_loaded,,columns-4,qode-child-theme-ver-1.0.0,qode-theme-ver-6.7,wpb-js-composer js-comp-ver-4.4.3,vc_responsive 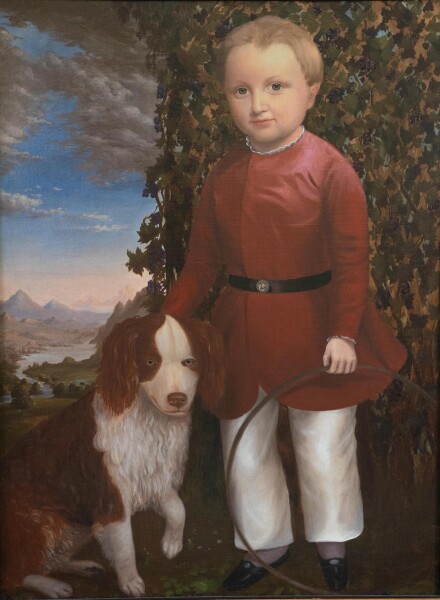 A Portrait of a Boy With His Dog

Born in Springfield Massachusetts, Joseph Whiting Stock had an oxcart fall on him at the age of eleven, leaving him as a paraplegic. It is said that one of his doctors encouraged him to take up painting as a pastime after the accident. He first commission was to do a series of anatomical drawings for a Dr. James Swan in 1834. Consequently, Dr. Swan constructed a wheelchair allowing him to paint large canvasses and to be lifted on to trains to travel for commissions. For the next two decades Stock travelled around New England accepting commissions for portraits. Throughout his travels he retained a studio in his hometown of Springfield, MA. It is said he shared his studio with local photographers and sometimes would use their photos as the subject for his work. He died at the age of forty from tuberculosis.

WHY WE LOVE IT: There is nothing quite like a boy with his dog. You can see the sheer joy in both their faces in this photo.