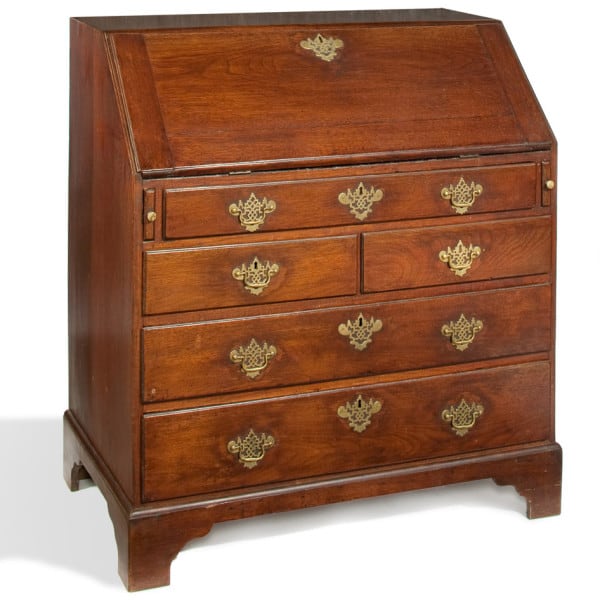 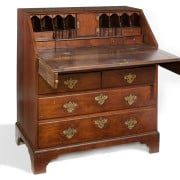 This bold Baroque desk hails from Albemarle or Orange County, Virginia, and is among the  finest colonial examples from the Virginia piedmont.  It is part of a small but accomplished group characterized by stepped writing interiors with a central prospect door that is flanked on either side by a boldly shaped serpentine drawer, and in the lower center, a broad  “map” drawer.

Such interiors reflect the evolution of a design that originated about 1720 among cabinetmakers who worked  between Norfolk and Williamsburg, and then spread inland from the Chesapeake.

The earliest desks in the piedmont group seem to date circa 1750, and have histories in Albemarle or, like this desk, Orange County. Among those with clear provenance, is a desk originally owned by the Meriwether family of “Cloverfields”, near Keswick, in Albemarle, and a second example, now in a private collection, owned by James White who lived on the county line between old Albemarle and Orange Counties, perhaps in what is now Greene County.  An 1824 tax receipt recording assessments on ninety-nine acres in Albemarle County was found lodged between the secret drawer and the back of this third desk.1  It was inscribed on the top, “James White’s Estate Orange.”2

This desk here offered is among the earliest in the group, and has two features that tie it to Tidewater products the 1720-1750 period. These include the two short drawers side by side, on the second tier beneath the fall-board, as well as the bold ogee shaping on the lower fronts of the pigeon hole dividers. Both of these features appear on Queen Anne Tidewater desks having wells with sliding lids inside their writing interiors.

In addition to the stylistic features cited above, desks in this group have certain structural features:

This desk was found in Orange County about 1983 by antiques dealer Steve Ramsay.

1 White’s will and inventory were filed in the Orange County court; the only desk listed in the inventory of his estate is a “desk and bookcase 25.00;” since the desk had a later bookcase screwed to the top, it is possible that it is the one inventoried.  Wallace B. Gusler.  “Queen Anne style desks from the Virginia piedmont.”  Magazine Antiques.  October 1973, pages 665-666, figures 2-3. “James White” was probably the same James White who received a 418 acre land grant in Orange County on October 10, 1821;  this grant abutted “Brokenback Mountain,” which is located near Stanardsville in what is now Greene County, Virginia; the grant was also located along the property lines of John Gibson and James Gentry, who both resided along the county line between Albemarle and Orange; Gentry (1757-1851) had removed to Albermarle from Hanover County in 1787.  Virginia State Land Office Grants No. 70, 1820-1821, pages 466-467 (Reel 136); Library of Virginia

2 A second group of desks is centered in Mecklenburg and Halifax Counties, in the Southern piedmont, and probably represent the work of an apprentice from Albemarle or Orange who moved south and established his own shop.  Referred to as the “Crow” group based upon the remnants of a signature that appears on a small desk drawer, documented forms include not only desks, but cupboards, presses, chests, and chests of drawers.  See Luke Beckerdite.  “Style and Technology Shifts in One Virginia Shop.”  Journal of Early Southern Decorative Arts.  November 1983, Volume IX, Number 2.  Winston-Salem, NC: Old Salem, Inc., 1983, pages 20-42.