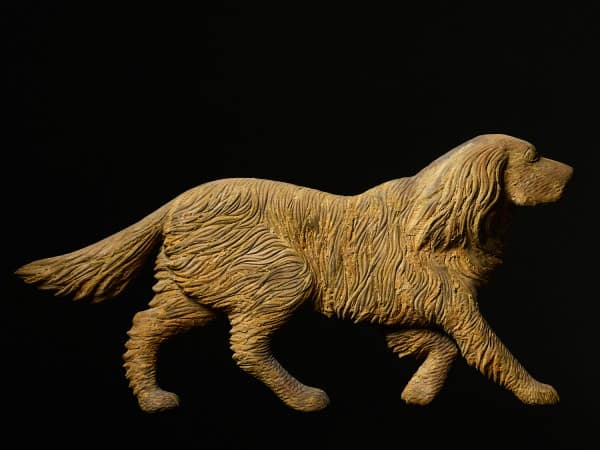 Provenance: from the collection of Florence Knoll Bassett (1917-2019)

This weathervane mold is from the collection of Florence Knoll Bassett, a pioneering designer and entrepreneur who created the modern look and feel of America's postwar corporate office with sleek furniture, artistic textiles and an uncluttered workplace environment.

Harry Leech (1809-1885) was a carver of nautical figureheads in Boston who moved to Woburn to continue his craft. He crafted numerous weathervane molds of dogs and other animals. Wooden patterns like these were the first step in the production of most hollow-bodied copper weathervanes in the second half of the 19th century. Cast-iron molds were made from the patterns, into which sheets of copper were hand-hammered. Alternatively, the larger workshops added another step to the process. Molten lead was poured into the mold, forming a positive and a negative impression. A copper sheet was placed between the iron mold and the lead and hammered into shape. Details were then sharpened by hand before the weathervane was soldered and gilded.