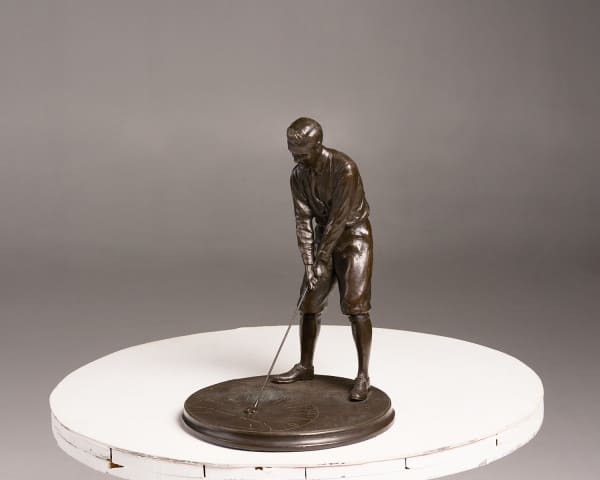 The English artist, Edwin E. Codman created this piece in the 1930s, using golf legend Bobby Jones (1902-1971) as the model for the figure. Codman spent the early part of his life in England but with his family moved to Providence, Rhode Island around 1891. Codman, his father and another brother all worked at the Gorham factory and founded a silversmithing dynasty there. Edwin was known as a sculptor-modeler, creating exquisite, small bronze sculptures.  In 1931 he moved to Dorset, Vermont where he and his wife lived quietly until his death in 1955.

Bobby Jones won fame between 1923 to 1930, culminating with the Grand Slam that included the British Amateur and British Open.  It is very plausible that Codman made the sculpture and sundial in 1930 to recognize the fame Jones upon his retirement. An exact copy of this sundial is at the Augusta National Golf Club at which Jones designed the course and helped to found the club. Codman also produced a pair of bronze bookends with Bobby Jones and his wife, golfer Glenna Collet during this period.

Condition: Survives in original condition with a great old surface.