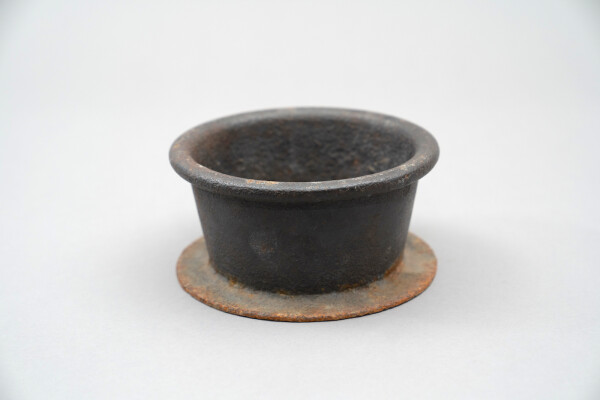 Cast iron has a strong history in the state of Virginia and this wonderful example is something we believe that has been manufactured in our own backyard. We find this particular pot to be a spectacularly unusual example with the large flange base and solid thick rim.

In the Virginia backcountry of the 1700s and early 1800s, iron manufacturers moved down the Shenandoah Valley from Pennsylvania and Maryland and set up early furnaces, such as Redwell Furnace and Isabella Furnace, both north of Luray, and Pine Forge, northeast of New Market, where they found the combination of good iron ore, limestone, water power, and abundant timber for charcoal.

Early iron ore was mainly used for artillery, much of it shipped to England from Jamestown, until, in 1707, Abraham Darby, an Englishmen, patented a method for casting iron into relatively thin pots, making them cheaper to produce.  As indoor wood stoves became more widespread in the 18th and early-19th centuries, iron cookware began to evolve as well and flat-bottomed cast-iron skillets became essential pieces of cookware. Industrialized manufacturing helped lower the cost of producing skillets and pots even further, and towards the end of the 19th century, there were so many furnaces dotting the Shenandoah Valley that it was once billed as “Virginia’s Pittsburgh.”

The years after the Civil War were a period of great prosperity as the country rebuilt and pushed westward. Great quantities of iron were needed, but the Virginia furnaces were not equipped to meet the demand. Also, many Virginia furnace owners were reluctant to invest in the new technologies required to produce steel and couldn’t compete with the steel mills in Pittsburgh and Birmingham, Ala. Concurrently, cast iron cookware saw a decline as other cooking materials like aluminum grew in popularity.

WHY WE LOVE IT: We feel this piece would make the perfect dog bowl.