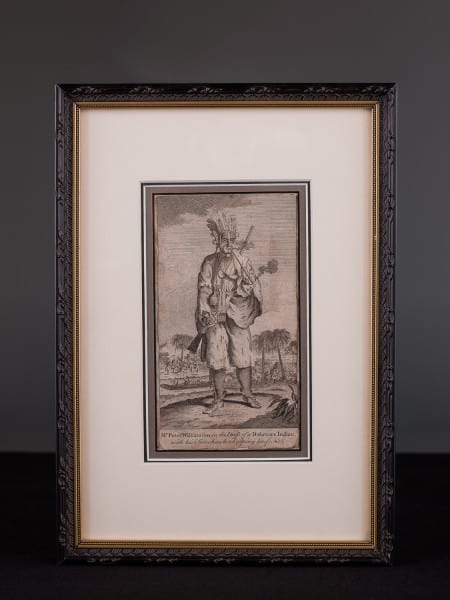 Mr. Peter Williamson in the dress of a Delaware Indian

Mr. Peter Williamson in the dress of a Delaware Indian with his tomahawk, scalping knife, etc.

London, 1759
Frontispiece: French and Indian cruelty: exemplified in the life, and various visciccitudes of fortune, of Peter Williamson …”

When he was 8 years old, Peter Williamson was abducted at the port of Aberdeen, crossed the Atlantic with 68 other boys and was sold in Philadelphia to planter Hugh Wilson. Several months before his indenture was complete, Wilson died and left Peter money and a horse. At 24, Peter married and settled in the frontier country of Pennsylvania. In 1754 he was captured by Cherokees. After some time, he escaped and joined the British army and was present at the Battle of Oswego where he was captured and exchanged for a French prisoner and put on a boat to Plymouth.

He travelled to York where he published a book detailing the vicissitudes of his life. His narrative became extremely popular and he gained a reputation by dressing like an Indian, giving displays of Indian life, performing war dances and selling copies of his book.