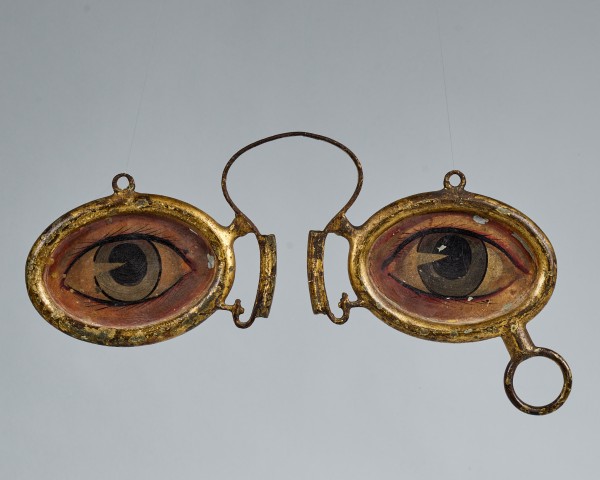 This metal two-sided optician’s trade sign survives with its original hand-painted eyes looking through an oval-shaped gilt pince-nez frame. It retains its two metal hanging holes that are integral to the frame, suggesting it was hung perpendicularly to the optician’s practice, likely over a walkway, in easy view of potential customers. The blue eyes were all painted with a cone of light emanating from them, simulating eye contact with a potential customer and inviting them to purchase a pair of new, fashionable spectacles.

The pince-nez was a style of eyewear without temples—the bars attached to the lens frame by hinges that keep the glasses securely in place by hooking over the ears. Instead, it was held in place by a nose piece or clamp that was pinched to fit the nose of the wearer. Although a design that has centuries-old roots, the pince-nez was at the peak of its popularity in the late 19th and early 20th centuries in part due to the invention of more supple springs, that enabled the glasses to sit on the nose without being held. The pince-nez sometimes contained a loop for attaching a ribbon, a chain, or a hairpin chain to fasten and secure them to the body, such as the one on the bottom of the gilt frame in this oculist’s sign.

Rare for the intact survival of original hand-painted blue eyes with detailed feathery eyelashes and slightly smaller size. Evidence of original surface is present on the frames of the glasses with early 20th century re-gilding. This sign was intended to be used outside a shop and was, as indicated by signs of oxidation. However, due to its good condition, it was likely eventually moved indoors.

WHY WE LOVE IT: Great size, beautiful condition, and a hell of a neat provenance.