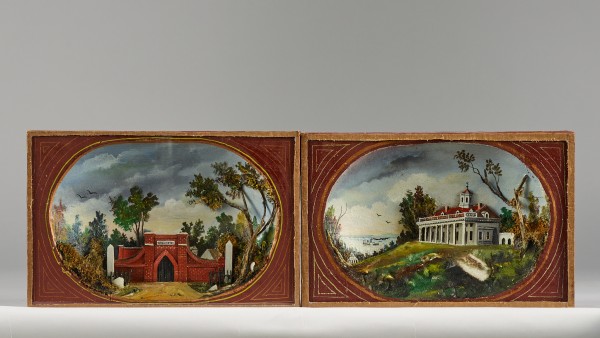 These dioramas, featuring Mount Vernon and Washington’s tomb, are extraordinary, a rare example of imagery of Mount Vernon. Carved from the solid, featuring moss, rocks, and paint decoration, these small dioramas are an amazing example of folk art. Mount Vernon, located in Northern Virginia on the Potomac River, south of Washington D.C. was the former home and plantation of President George Washington. The diorama of the main house shows the eastern facade of the house which faces the river. Built-in 1734, Washington inherited the home nearly three decades later. He would subsequently be in charge of renovations that followed. One of these renovations is present in the diorama. On the eastern facade, we see the veranda which was added in the 1770s. The diorama of the tomb of Washington is his new tomb which his body was moved to in 1831. Despite being built after Washington’s death, the tomb new tomb was built with the specifications Washington had given. He requested updates to be done as the old tomb was falling apart.

WHY WE LOVE IT: I am in love with any image of Mount Vernon, these pieces are wonderfully executed with great color and superior attention to detail.