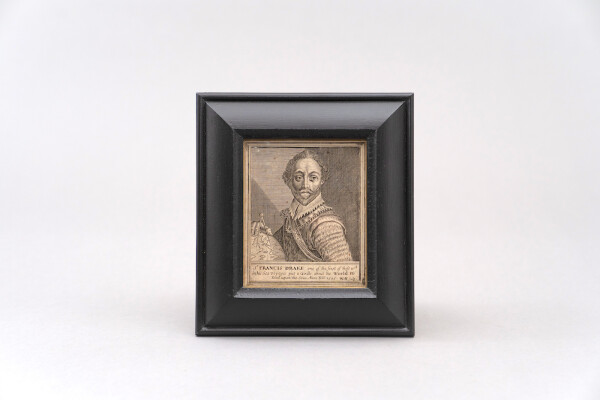 Etching of portrait of Sir Francis Drake, bust-length, slightly turned to the left and looking to the front, with a small beard, in an embroidered doublet with a lace collar, a sash over his shoulder, and his right hand resting on a globe with a pair of compasses; illustration to Fuller’s “The Holy State” (1648)

Inscription content: Lettered below image “Sr Francis Drake one of the first of those wch in his Sea voyages put a Girdle about the World. He Died upon the Seas. Anno Dm 1595. W.M. sculp:”

William Marshall was a seventeenth-century British engraver and illustrator, best known for his print depicting “Charles the Martyr”, a symbolic portrayal of King Charles I of England as a Christian martyr.

WHY WE LOVE IT: Although the English viewed Sir Francis Drake as a hero, his privateering caused the Spanish to brand him as a pirate with King Phillip of Spain placing a bounty on his head. We can’t help but to think this attractive engraving of this intriguing pirate would be a great addition to a library or study wall.