Thistlethwaite Americana | The Steamboat Isaac Smith on the Hudson River
We pride ourselves on presenting distinctive fine and decorative arts from the 18th through the 20th century highlighting great American design.
antiques, americana
17543
single,single-product,postid-17543,woocommerce,woocommerce-page,ajax_updown_fade,page_not_loaded,,columns-4,qode-child-theme-ver-1.0.0,qode-theme-ver-6.7,wpb-js-composer js-comp-ver-4.4.3,vc_responsive 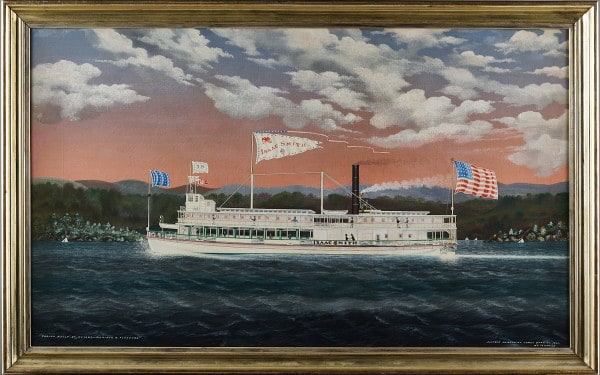 The Steamboat Isaac Smith on the Hudson River

James Bard received numerous marine commissions during the ship building boom years between 1850 and 1880 in New York. His style was designed to please his patrons depicting the boats underway with flags waiving including a large one with the ship’s name.

Isaac Smith was built by Lawrence & Foulks in 1861 for passenger-cargo service on the Hudson River in New York. She was purchased by the U.S. Navy in New York City from E. J. Hamilton 9 September 1861. She was armed and on 17 October 1861[1] was commissioned as USS Isaac Smith.

Isaac Smith was assigned to the south Atlantic and on her journey south towed a sister ship, Governor in peril near Cape Hatteras. Early in November, 1861, Isaac Smith engaged and repelled three attacking Confederate steamers and silenced batteries at Hilton Head and Bay Point, South Carolina. Two days later she towed sailing sloop-of-war Vandalia into action during the landings which wrested Port Royal from Confederate hands providing the Union a base for the fleet and for combined U.S. Navy-Union Army operations against the Confederacy. During 1862 the steamer participated in engagements  in Savannah, and St. Augustine and in August set sail for New York for repairs.

Isaac Smith returned to her squadron on 11 October 1862. Then Rear Admiral Du Pont ordered her to the Stono River, where she served until 30 January 1863. That day she was caught in a crossfire from masked shore batteries. Isaac Smith was disabled by accurate fire and with her deck covered with wounded men, her captain surrendered the ship rather than risk their lives. Eight men were dead and 17 were wounded.

After her capture, the ship served in the Confederate States Navy in the waters around Charleston, South Carolina, under the name CSS Stono until she was wrecked on the breakwater near Fort Moultrie, South Carolina, while attempting to run the blockade with a load of cotton on 5 June 1863.

Literature: Listed and illustrated in the Mariner’s Museum and Anthony J. Peluso, Jr., “The Bard Brothers: Painting America Under Steam and Sail,” pp. 128-29, 171.