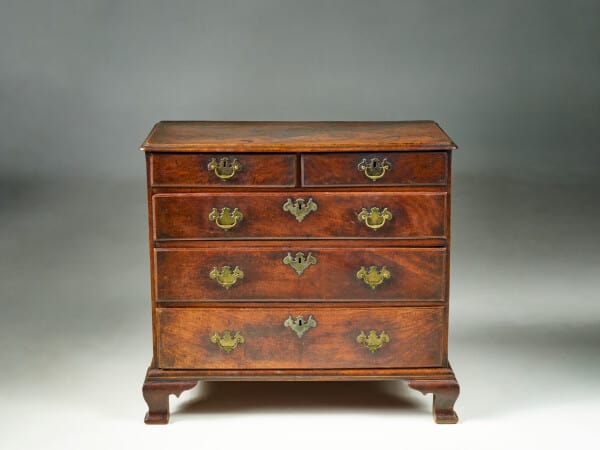 An early chest of drawers from Tidewater Virginia (possibly Surry County) in an original, mellowed finish evidencing the adherence to British form and construction of cabinetmakers from the region in the mid-18th century. The chest shares affinities with early pieces from south eastern Virginia in the overall severity of form, British construction techniques, and aesthetic choices. These similarities include the full dustboards which are the same thickness as the drawer blades and extend the full thickness of the case. The drawer bottoms and sides are made of significantly thinner stock. The distinctive broad and flat cove profile of the top board is seen in other pieces from that ares case pieces. (See Gusler, Furniture of Williamsburg and Eastern Virginia; Richmond, 1979, especially figs. 14 and 53). The base molding profile is also typical of tidewater Virginia work.

There are several distinctive construction features that are idiosyncratic and point to an as yet unknown cabinetmaker or shop from the region. The entire foot is carved from two solid blocks joined diagonally, with no additional blocking. While the outside profile resembles an ogee bracket foot, the inside lacks the cyma curve and presents in a straight line. This feature has been seen of some piece from Surry County, Virginia. Supporting the rear feet is a horizontal board (instead of wing blocks) set below the vertical backboards rabbeted into their own frame above. The dovetails lack any kerf marks and there are no dovetails at the very top or bottom of the drawers, usually placed in those positions for added stability. These peculiar construction features deserve greater scholarly attention; by comparing these features to other known furniture a new shop might be discovered.

This remarkable chest survives in an original finish. It is an excellent example of early case furniture from the area in eastern Virginia dominated by the plain and simple style popular in tidewater Virginia.

I would like to thank Sumpter Priddy for his help in researching this piece.