Thistlethwaite Americana | The Battle at Bunker’s Hill
We pride ourselves on presenting distinctive fine and decorative arts from the 18th through the 20th century highlighting great American design.
antiques, americana
17718
single,single-product,postid-17718,woocommerce,woocommerce-page,ajax_updown_fade,page_not_loaded,,columns-4,qode-child-theme-ver-1.0.0,qode-theme-ver-6.7,wpb-js-composer js-comp-ver-4.4.3,vc_responsive 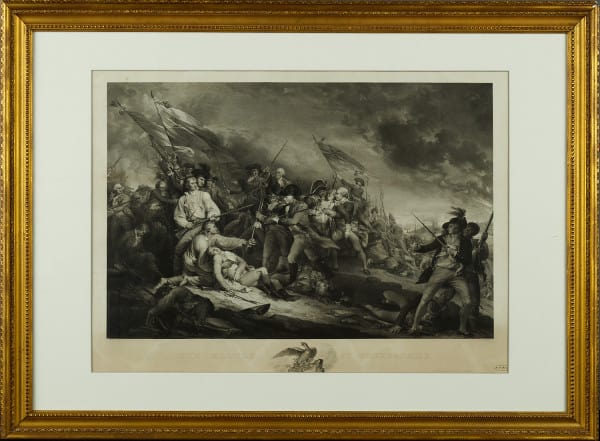 The Battle at Bunker’s Hill

Fine example of John Tumbull’s iconic view of The Death of General Warren at Bunker Hill, an oil painting by the American artist John Trumbull depicting the death of General Joseph Warren. Warren, an influential Massachusetts politician was commissioned a general, but served in the battle as a volunteer. He was killed during or shortly after the storming of the redoubt atop Breed’s Hill by British troops.

Trumbull, son of the Governor of Connecticut, was uniquely qualified to paint scenes of the American Revolution, as he served in the Continental army during the war and knew first-hand the characteristics of the American and British armies and the nature of this conflict. He also knew many of the participants of the Revolution and so was able to hear first-hand those events he did not himself participate in. During the battle of Bunker’s Hill, Trumbull was stationed in Roxbury, on the far side of Boston from Charlestown, whence he could hear the sounds of the battle.

Trumbull began with a painting of “The Death of General Warren at Battle of Bunker Hill” in the fall of 1785, finishing it the follow March. This canvas was called by Benjamin West “the best picture of a modern battle that has been painted”, and it was well received by those who viewed it in West’s studio. Trumbull had absorbed the style and form of West’s work, but added to this his own personal knowledge of the individuals and the military dress, weapons and events of the time. Through West, Trumbull met Antonio di Poggi, an artist and print publisher, who found Johann Gotthard von Müller, an engraver from Stuttgart, who agreed in July 1788 to undertake the engraving of Trumbull’s Bunker Hill.

The engravings were printed in America in several editions.  This version was printed circa 1850 in New York.

WHY WE LOVE IT: This image was used to illustrate the beginning of the American Revolutionary War and features the dying soldier as a Christ-like figure before he is risen to the cross.  The allegories behind this engraving really create a great sense of pride in the founding of America.