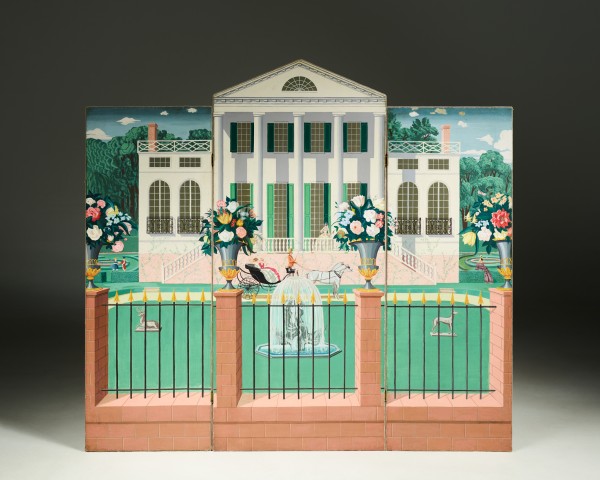 During the 1920s there was a desire to capture an idealized past. This screen does exactly that. From the large colonial mansion estate to the children playing in the garden that is filled with statues, this unusual screen with architectural elements is certainly a rare find.

Allen Saalburg was born June 25, 1899, in Rochelle, Illinois.  Charles Saalburg, his father, a newspaper cartoonist, and printer moved the family to New York when he obtained a patent for early four-color printing, first used to print the cartoon strip The Yellow Kid.

Allen Saalburg studied painting at Pratt Institute, and with William Sloan at the Art Students League, 1918-1920. In 1927, he joined his brother, Leslie, an illustrator, in Paris for three years.  He exhibited paintings at Bernheim-Jeune, the Right Bank gallery known for its adventurous displays of early modern art.

Saalburg’s paintings were exhibited in a one-man show in November 1929, some months after fellow American Gerald Murphy’s larger exhibition.  The exhibit alluded playfully to American historical subjects, such as the tobacco trade.  He returned to New York in 1930, where he rejoined a largely literary circle that included Dorothy Parker, S.J. Perelman, Robert Benchley, and Marc Connelly.

In 1937, Connelly asked Saalburg to art direct the Hollywood movie of his Pulitzer Prize-winning play, The Green Pastures, with its pioneering all-black cast; Saalburg’s backdrop paintings were acquired by Gertrude Whitney for the Whitney Museum.  He also designed sets for Enig Bagnold’s Two Bouquets on Broadway. He showed paintings at the Kraushaar Gallery and the Whitney Museum (1938).

He continued to paint murals for private and institutional clients, and he began painting covers and interior illustrations for Fortune, Vogue, Vanity Fair, the Saturday Evening Post, and other publications.  In 1935, Juliana Force, the director of the Whitney Museum and organizer of the first Federal Art Program in New York, introduced Saalburg’s work to the Parks Commissioner, Robert Moses, who put him in charge of the WPA mural projects for the entire parks department.

Projects included the Old Stone House at Gowanus in Brooklyn, the Arsenal in Central Park (where Moses had his office), the bar room of the newly created Tavern on the Green, and the terrace restaurant at the zoo.  In the mid-1930s, he entered into a partnership to produce murals with Louis Bouche and Everett Henry, then the only such firm in the U.S.

Among their projects were twelve murals for the cocktail lounge cars of the ultramodern trains commissioned from industrial designer Raymond Loewy by the Pennsylvania Railroad, the original gourmet shop at Bloomingdale’s, and a mural with eighteen interior panels for the Home Building Pavilion at the 1939 New York World’s Fair.

At the first part of a weekend colony, he moved to Uhlerstown in 1947 and opened his studio, the Canal Press, in nearby Frenchtown, New Jersey.  He continued to paint while experimenting with the silk-screen process; his prints on glass and paper were sold principally through the New York Graphic Society during the 1950s and ’60s.

Mural projects from this period included screen-printing the Clairol Pavilion for the 1964 World’s Fair in New York, an entirely glass building.  Saalburg continued to show new paintings and limited edition screenprints in one-man shows at the Bodley Gallery in New York and in the Bucks County area until the early 1980s.

Saalburg was married to and divorced from costume/fashion designer Muriel King, and the painter Mary Faulconer.  He died July 17, 1987.

WHAT WE LOVE ABOUT IT: The imagery of the colonial mansion is very reminiscent of the early scenes of Gone with the Wind. It takes us back in time through the vivid colors and whimsical scenes.