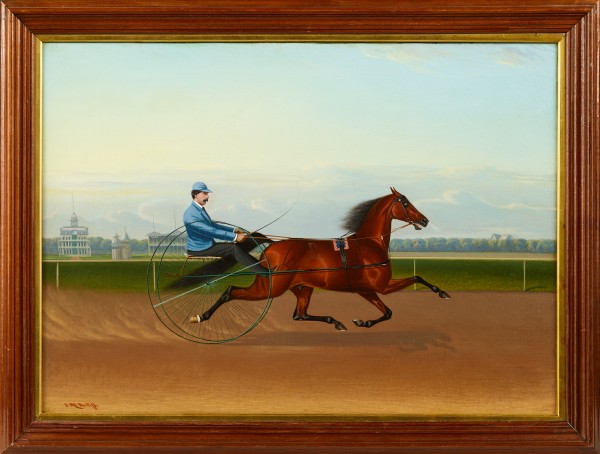 This painting depicts the horse, Henry, running a 2.20 1/4. He was by Harry Lathrop, son of Blood’s Black Hawk and driven by Dan Mace.

Dan Mace (1833-185) was one of the most celebrated drives of the mid-19th century. Known as the ‘wizard of the reins’ he was always a favorite at the track. he was the famous driver of Ethan Allen and set many records throughout the 19th century.

John McAulliffe was a well known painter of horses.  He was born in Ireland.  He came to this country in 1847, and had always resided in this city.  He was originally a house painter, but, as he had a natural gift for drawing and painting horses, he soon took to that as a business.  He painted extensively for the later Robert Bonner, Commodore Dickinson, Col. Kipp, Sheppard Knapp, Gabe Case, and Mesrs. Wakeman, Hammond, and others.

WHY WE LOVE IT: There is so much action in this painting. From the horse’s stride to the look of panic on the driver’s face at the sheer speed of the horse.