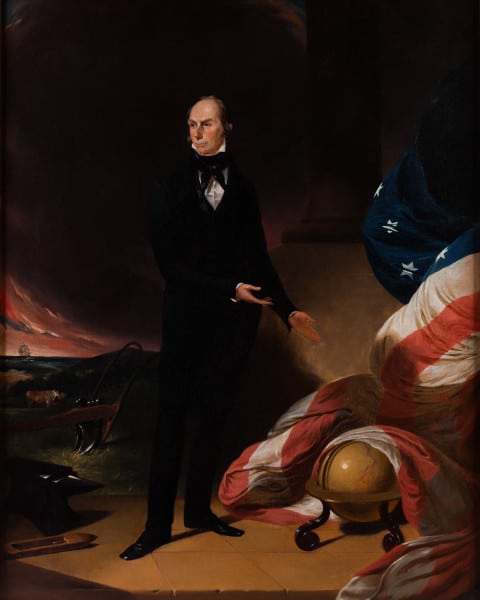 This painting is a fine copy of a portrait of the noted American statesman painted from life by John Neagle (American, 1799-1865) in 1843. Neagle’s original painting is in the collection of the Union League of Philadelphia, and an autograph copy is in the U.S. Capitol Building. Yet another larger copy made in 1852 by Ambrose Andrews resides in Clay’s estate, Ashland, in Lexington, Kentucky. In this smaller painting made after Neagle’s composition, Gould skillfully captures all the nuances of Neagle’s original, notably the remarkable expression in the mouth.

Both Neagle and Gould were natives of Philadelphia and two of the most respected portraitists of their day. At an early age, Gould studied with the landscape painter John Rowson Smith and the portraitist, Thomas Sully. At age 15, he exhibited at the Pennsylvania Academy. This portrait was completed before Gould reached the age of 20 because in that year, 1849, Gould left America for Europe, soon settling in Florence. He built a considerable artistic reputation in Europe as a painter of Orientalist subjects, which were prized both for their originality of design and skillful coloration and draftsmanship. His American portrait work is quite rare since most of these pictures which he housed in Fredericksburg, Virginia, were destroyed in the Civil War. This powerful painting demonstrates his skill at its best.

Why we love it: The most iconic image of The Great Compromiser. Without him, the Civil War would have happened a lot earlier.